Feeling Out Sources of Midfoot Pain 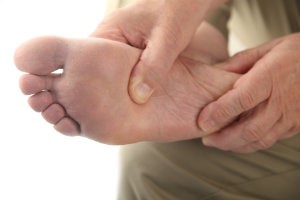 If you have both older and younger siblings, you likely know how much of a pain it can be to find yourself in the middle. Sometimes you feel like the only reasonable one, yet when everyone else is clamoring for attention nobody really knows what to do with you. The midfoot is kind of like that. People are fairly familiar with heel and toe conditions. However, they generally don’t think about midfoot pain until it happens to them.

When considering the sources of midfoot pain, it helps to know some of the parts that exist there. When we talk midfoot, we include the small tarsals, a cluster of bones that connects the toes to the rest of the foot and forms a joint (the heel bone is considered a large tarsal, but gets its own show). There are also several tendons including the extensors (which straighten the toes) and the stout plantar fascia running beneath the foot.

Pain in the midfoot can come from many conditions and sports injuries similar to those found in other parts of the foot. The midtarsal joint can become sprained, the extensors or other tendons can become inflamed, and the plantar fascia can become strained. Stress fractures are also possible, although they tend to be a bit more common elsewhere.

The key to midfoot pain is that the causes can be varied. Do not ignore any problems between your heel and toes; get them checked out at Martin Foot and Ankle. Our expert doctors understand all parts of your feet and ankles and can provide treatment for faster healing and a reduced chance of further issues in the future. Call our offices in Hanover, Lancaster, Lititz, or York at (717) 757-3537 and take a healthy step toward happier feet.

by Dr. Jeffrey A. Dunkerley
Be the first to comment!

To reply to this message, enter your reply in the box labeled "Message", hit "Post Message."