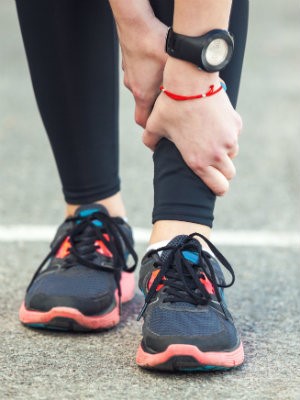 The shins never really seem to get much good attention, do they? Nobody ever says an outfit really brings out your shins. They only ever really seem to come up when they’re in pain, such as from a swift kick in the shins, or getting the ever mysterious shin splints.

Just What Are Shin Splints, Anyway?

“Shin splints” is a mainly catch-all term to describe pain that is felt along the shinbone, otherwise known as the tibia. This pain can be felt along the front outside part of the area or along the inside of the leg. The term is really more of a nickname. If you hear a doctor mention “medial tibial stress syndrome,” then they’re talking about shin splints.

Shin splints are commonly seen in active people such as runners, dancers, and anyone else who places repetitive stress on the shins. The bone tissue, as well as surrounding muscles and tendons, can become overstressed and injured if they are worked at a higher level of activity than they are currently conditioned to handle. Other factors such as overpronation, worn shoes, or running on uneven surfaces can alter the distribution of force throughout the lower body and also help overstress the shin area.

Not any pain in the shins automatically signifies splints, however. There are other conditions that can create pain the in the same area that must be considered during such cases. It may be possible that there is a stress fracture, or small crack, in the surface of the bone. Compartment syndrome, a swelling of the muscles that creates pressure in a closed space, could also be to blame. In general, the pain of splints tends to be more generalized than on a specific area that hurts more to press on. The pain might also grow worse in the morning and is its most painful when trying to lift and flex the foot upward at the ankle.

Giving Shins their Due

Taking care of a case of splints is often a case of giving your shins time to rest. Taking a break from pain-causing activities will give the area time to recover, but you don’t have to give up getting out entirely. Low-impact exercise such as swimming and biking can still be performed if it doesn’t cause pain.

In the meantime, engage in some ways to relieve the discomfort and potential swelling their may be. Applying an ice pack to the area up to eight times a day for 15-20 minutes at a time can help during the first few days. Over-the-counter pain relievers such as acetaminophen and ibuprofen can also help.

Once your shin has healed, get back into your original activities gradually, starting small and slowly building your levels back up. If you try to go to quickly, too soon, you might end up back at square one again, or have caused worse damage.

If your shin pain has not improved after a few days of rest, or if it keeps returning, consult with us at Martin Foot and Ankle. We’ll provide expert diagnosis, treatment, and advice to not only take care of pain, but help prevent it from occurring again. Our offices in York, Lancaster, and Hanover are here to help you. Call us at (717) 757-3537 to schedule an appointment.

by Dr. Bradley B. Boyer